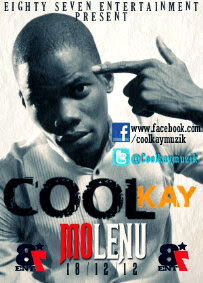 Cool Kay debuts with a cool rap song on 9jaupdates. On point delivery with depth. Cool Kay is cool. We hope to hear more from him. Listen, download and share your thoughts...


Adekoya Oluwafemi Kayode a.k.a Cool-Kay was born on the 18th of December in a little hospital of an industrious big city popularly known as Lagos state.

Cool-Kay loved the entertainment scene from a very young age working beside the scene, performing at shows early has helped him to freshen is stage skills and also the "COOL AND CRAZY" figure like is friends call him.

Cool-Kay has performed at both small and major Events,his talent is well talked about and followed by is growing number of adoring fans Especially the ladies who love is Cool And Crazy Style.

The Rapper/Song-writer is currently under the management of 87Entertainment and his currently working on a project titled " COOL AND CRAZY " a mix-tape album busting out with a single "MOLENU Cool Mix" which has received very respectable acclaim as one of the hit songs of 2012 by local & international writers.

Press Release
Cool Kay makes his debut appearance with a banging new single titled "Molenu Cool Mix". A really cool jam lyrical flow  which gives it a unique appearance, the fusion of the the beat and the way Cool Kay handled it was absolutely Awesome.


This talented rapper/song writer and lyricist is set to take the entire industry by storm with is new brand of "COOL AND CRAZY" flavor. He is already becoming a subject of discussion and the Ladies Can't Get Enough of Him.