BUTAFLY - STARTED AT THE BOTTOM (A DRAKE COVER) 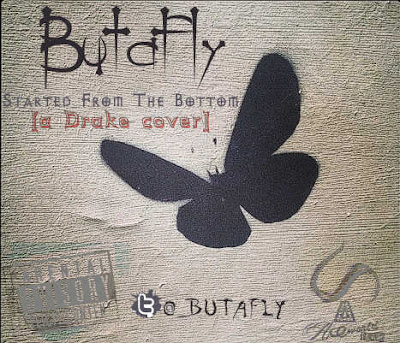 Nigerian upcoming Hip-hop artiste, Butafly aka TBB whose smashing mixtape single “Gidi Gurl” has been referred to as one of the best materials from a female rapper in recent times has broken her silence with a breathtaking cover version of the new hit single “Started From The Bottom” by Canadian born rapper, Drake.

According to the Lagos based rapper, “The Original version by Drake is totally inspiring, I decided to record a cover version after my first listen and this will certainly whet the appetite of my fans who are eagerly anticipating a new release from me after 'Gidi Gurl' ".

Butafly is currently recording new materials which will soon be premiered online and subsequently on radio stations across the country, the first on the list is “Sploofic”, an urban rap tune produced by Prolishey and scheduled for a March 11th, 2013 release.

The music industry is no doubt ready for the versatile female rapper set to storm the scene soon.