THE JOURNEY - CHAPTER 4 (A MINI SERIES) 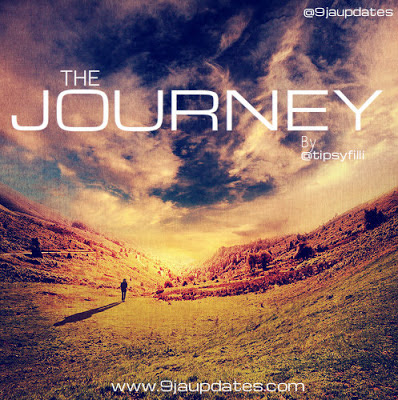 
When it was time for us to leave, we split up into the tree cars available that evening. Bells’ car was in the shop and she'd hitched a ride in with Raj that afternoon. However, Raj was going over to his sister’s on the other side of town, so it made sense that she would travel with Liam and me since her apartment was on our way. Thank God for little mercies, at least the awkward moment I was dreading would be prolonged for a bit longer! We all said our goodbyes in the parking lot and split up. Still feeling numb, I sat with Bells in Liam’s car and watched him walk Del to Matt’s car. He shut the door of the passenger seat after she got in and propped his arm against it while they talked for a few minutes. I wanted so much to simply sink into the seat and disappear from sight. I wanted to plant my fist in his face. I wanted to talk some sense into him. Scratch that. Make it give him a really nasty piece of my mind!  I wanted to rewind the day a couple of hours back and re-write the script. I wanted to put the squashed marshmallow back together.
Finally, he straightened up and watched them drive out of the parking lot and then came back to the car. Bells chatted all the way to her apartment. If she noticed that neither one of us was paying her much attention, she didn’t seem to mind. She waved goodbye to us, calling out to Liam that she would see him in church the next day. We drove in silence to the house and we could as well have been in separate universes. Who would have thought that once upon a time, I would have given an arm and a leg just to sit in the same car with this man and that my therapy for when I’m feeling blue or sad was a Mark-Petersburg-marathon?! Talk about life being ironic!
“Frankie, we need to talk.” He said when I made to get out of the car. I stopped without turning to look at him.
“Yeah.” I said simply. If he was hoping to get some help from me, he could think again!
“I think I owe you an apology.” He said from behind me. I turned around to stare out the windshield, arms crossed and waited.
“I shouldn’t have kissed you, at least not now, I wasn’t thinking…”
“What do you mean not now?!” I interrupted, turning to glare at him.
“I know I should have given you time…”
“Whao! Hold up! What on earth are you talking about?!”
“I know that…”
“What about Adele?!” I blurted out.
“What?!”
“Well she…you guys…what the hell is going on?!”
He gave me that look that said I was bonkers and laughed awkwardly.
“You thought Del and I..”
“Well?”
“No!”
“But…”
“No! She’s one of my best friends, always has been, but we’ve always just been friends!”
“You guys seem to have this…” my hands flailed about “…thing!”
“Thing?! What are you talking about?!”
“I don’t know, you’re always going on and on about her and tonight you painted such a cosy little picture!”
“What?!” he looked horrified. “You actually think I would…I was telling her what an idiot I’d been kissing you and…”
“Oh my God! You what?!” Could it get any worse?!
“She gave me an earful and asked me to stop acting like a silly kid, you call that cosy?!”
“I…why on earth would you tell her?!”
“Because she’s my best friend and well, the others would have given me a tougher time!”
I honestly had no idea what he was going on about and I couldn’t be bothered! I just wanted this very awful night to come to an end! I felt like a total idiot for every reason in the world!
“Frankie, I …did I come across as that kinda guy?” he asked. He looked so crushed and I wanted to slap myself silly for making him feel that way.
“No! I …” I shook my head helplessly. “…I read the situation all wrong…I’m so sorry!”
“No, I’m the one who should do the apologizing.” He said. “I guess I’m the one who read things all wrong!”
Talk about an awkward situation! I wondered how to set things right, repair the damage and go back to being friends. At least, to being Grand-Landlord and Tenant.
“Liam, I like you an awful lot. You’re a really great guy and you’ve been a good friend these last couple of months and, I can’t believe I’m telling you this, but I had this massive crush on you!” He smiled ruefully at me. “But…I don’t…I…”
“I know.” He said quietly. “And I understand.”
“I…I’m sorry…”
“It’s okay.” He said.
“I just…I don’t want things to be awkward between us and…I…”
“Yeah, I know.”
We sat in silence for a moment, both lost in our thoughts.
“I should go in.” I said, breaking the uncomfortable silence.
“I’ll walk you in.” He replied and we got out of the car.