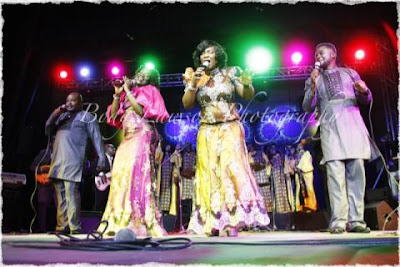 South Africa just got listed in the World Tour diary of Nigeria's leading faith-based singing group, earning the quartet a new level of recognition and respect.

With a vision to tear down the walls of religion through music, Midnight Crew is surely putting the praise of God on the lips of all.

Performing songs from their four albums since the inception of the group, Midnight Crew proved racism and tribalism wrong as mixed nationalities of the South African nation sang along in admiration.

Their all time classic,"IGWE" caused a strange godly fire through the land, unifying South Africa in praise to the creator of mankind. Songs like Kene Jesu, All Power, Turn it Over, sO gOOd, sO Worthy and Next Fuji Thing from their albums including the latest "KING OF NATIONS" kept thousands of people responding to the joy that radiated from the several ministrations.

Six weeks, fifteen appearances and a hectic media tour in South Africa causes one to envisage brighter future for the amazing quartet.