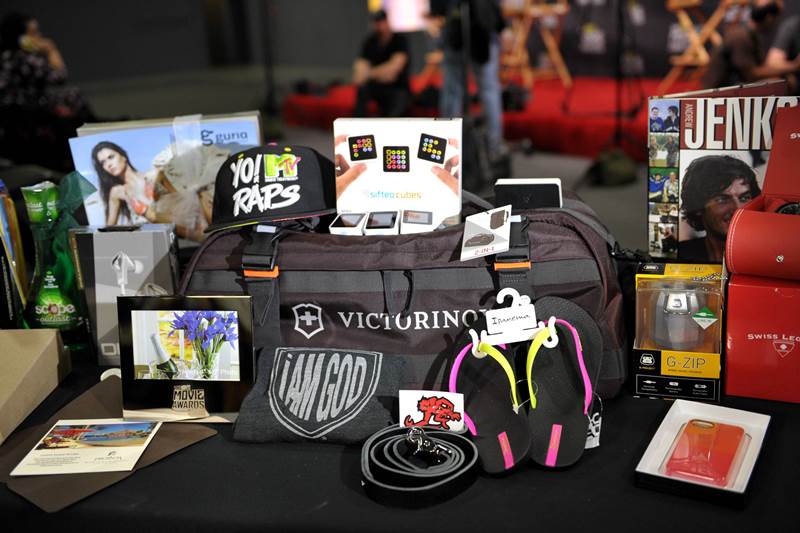 Stars at last weekend’s MTV Movie Awards in Los Angeles, didn’t walk away empty-handed even if they don’t win one of the Movie Awards’ coveted “golden” popcorn trophies….

The custom-designed “2013 MTV Movie Awards” talent gift bag for celebrity nominees, presenters and performers includes some of Hollywood’s most coveted items including Monster DNA™ headphones, a Sifteo Cubes portable game system and a lavish stay at The Palace of the Lost City in Sun City, South Africa.

Don Q Rum - A bottle of Don Q Gran Añejo Rum. The only rum in the world that is a winner of the 5 Star Diamond Award.

G-Project - G-ZIP is small enough to fit in your hand and loud enough to turn any listening experience into an instant party. G-ZIP connects to any device that has a 3.5mm headphone jack and is equipped with a rechargeable battery allowing up to eight hours of on-the-go listening.

I AM GOD MOVEMENT - The most powerful logo you can wear, the original I AM GOD t-shirt.  Turnyourself on, become AWAKE & AWARE!

Ipanema - Ipanema creates Brazilian flip-flops and sandals with a strong environmental and ethical influence, inspired by the culture of Ipanema Beach in Rio de Janeiro.  Our style and sustainability are quickly making Ipanema a favorite of the celebrity and fashion worlds.

Jewelry Television - Jewelry Television’s Jewelry School is proud to feature international artist, author and instructor Dale “Cougar” Armstrong, who patiently teaches you how you can create your own fashionable jewelry.  Within a couple of hours, you will be wearing your own finished creations!

Karlie’s Kookies – Karlie Kloss and Milk Bar collaborated on a fashionably wholesome perfect 10 kookie. Each kookie feeds 10 nutritious meals to those in need.

Kai - An intoxicating blend of ingredients, including the original kai perfume oil, the eau de parfum spray is available in a 1.7 oz (50 ml) atomizer.  The bottle is crafted from French glass and boxed in signature clean kai packaging.  The eau de parfum epitomizes the pure philosophy of kai: breath, life, flow.

Marchon Eyewear - Will gift a pair of Chloè Sunglasses.

Monster DNA™ - Monster DNA™ is the latest, most technologically advanced on-ear headphones created by Monster.  With their unique triangle shape and wide ranging color choices, Monster DNA™headphones enhance the music experience with Pure Monster Sound®, the next level of sound reproduction.  Articulate, tight, and ultimately revealing, it’s as close to live music as being on stage with the musicians. The special Monster Music Link features dual-port inputs that allow up to five headphones to connect at once and share the audio.

MTV x Caliber bracelet - The talent gift bags include a limited edition MTV x Caliber bracelet, which carries the unique serial number of an illegal firearm that was turned in to the Newark Police Department during a recent gun buyback.  The bracelet is part of the Caliber Collection, a line from Jewelry for a Cause that is made, in part, from the steel of reclaimed illegal guns.  The unisex bracelets are also available for purchase at caliber.MTV.com for $40, and a portion of the proceeds from each sale will be donated to the Newark Police Department to help fund future gun buyback amnesty programs.

Paramount Home Media Distribution - From David Chase, the creator of “The Sopranos”, comes the critically acclaimed story about friends, family and the power of rock-and-roll.  An evocative tribute to 1960s rock music starring Golden Globe®-winner*James Gandolfini (“The Sopranos”), NOT FADE AWAY debuts on single disc DVD on April 30. Featuring an outstanding soundtrack supervised by music guru Steven Van Zandt, NOT FADE AWAY stars an exceptional cast of young talent including John Magaro (The Brave One), Jack Huston (“Boardwalk Empire”), Will Brill (King Kelly) and Bella Heathcote (Dark Shadows).

Scholastic - Learn about the inspiring documentary filmmaker who has captured the attention of teens everywhere!  Fans of all ages will be able to discover everything they have ever wanted to know about Andrew Jenks from growing up to becoming a renowned documentary filmmaker in this comprehensive photo-biography.

Sifteo - Sifteo Cubes is a new portable game system that bridges digital and physical play.  Play on the tour bus, during down time with the fam, or whenever you’d like us to wake your brain up with interactive games that get your hands and mind moving.

Silver Gallery - Find the perfect gifts of silver and pewter worthy of commemorating the most important events in your life!

Uncommon, LLC - The Sorbet SeriesTM for the iPhone 5 PermafrostTM UN Deflector is available at GetUncommon.com and is the perfect way to dress your iPhone this spring and summer.

Victorinox Travel Gear - With superior versatility for everyday use, this spacious pack can be carried as a hand-held duffel, over-the-shoulder bag or backpack.

For more information on the 2013 MTV Movie Awards or other MTV programming on DStv, please go tohttp://www.facebook.com/MTVonDStv or follow us on Twitter @MTVonDStv.