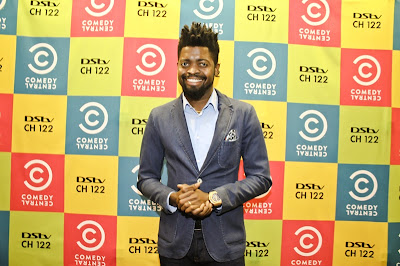 Transcending race and culture with his comic delivery, Basketmouth held the audience in the palm of his hand as he rolled out all the comedy stops to showcase his inimitable brand of humour.  Among the topics that had the audience laughing until they wept were his hilarious comments on Nigerian culture, what it was like to be a Nigerian in South Africa, the differences between a Nigerian couple fighting and a South African couple fighting, tips for guys on how to trick a girl into staying the night and tips for girls on how to avoid being tricked into staying the night!


Commented Evert van der Veer, Head of Comedy Central, Africa, “Basketmouth received the warmest welcome and the longest standing ovation we’ve ever seen - a triumphant endorsement of an artist at the top of his comedy powers, and sure proof that Nigerian comedy and comedians can cross borders and make get people laughing wherever they go.”

Supporting Basketmouth at the standup comedy showcase, which has been making comedy fans FOTFL for 18 months, were Comedy Central Presents…Live at Parker’s were “Griff” (@2TRILLION), Chris Mapane  (@ChrisMapane) and Mel Jones (@IAmMelJones).

California native, Arlen “Griff” Griffin fulfilled a lifetime ambition to become a comedian after starting out at three years old entertaining patients at the convalescent homes where his mother worked.  After working the geriatric circuit for a couple of summers, Griffin’s destiny was settled and he has since made a name for himself as one of the leading comedians and on-air personalities in the USA, where he regularly opens for acts such as Beyoncé, New Edition, Mo’Nique, D.L. Hughley, Fred Hammond, Donnie McClurkin, Dottie Peoples, Mary Mary and more.

Chris Mapane is a South African comedian who has been on the comedy scene for around seven years, thanks to his extremely infectious energy and powerful on-stage presence. 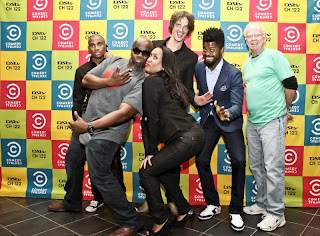 Mapane’s star started shining back in the days when he mentored So You Think You Are Funny contestants, which led to being on the same stage with the likes of Terry Pheto and Lira, Brandy, Regina King and Vivica A Fox at the SA Sports Awards.  His skills earned him an Ikusasa Comedian of the Year nomination in 2012 as well as the opportunity to host the Olympics sendoff event for the South African Swimming Team and the Telkom Foundation “Beacon of Hope” event, to mention just a few.  Featured in Destiny Man’s Power of 40, Mapane has recently tried his hand at acting, featuring in the David Kau directed film Taxi Ride, where he plays the lead.

A product of the Cape Comedy Collective's Comedy Lab workshops, Mel Jones burst into the limelight with signature confidence and sexy style.  This single mother brings her singular perspective as a young woman looking in vain for “Mr. Right”, to the great amusement and enlightenment of all.  Jones is a regular on SABC 3's Comedy Showcase and the Phat Joe Show.  Her shows, Doing It for the Money and Still Doing It with Tracy Klass have been big hits, along with her presence on 94.5 Kfm since 2003.  In fact, it was her stage performance that led her to radio when - while being interviewed on the station - she was asked to join the team.
Launched in sub-Saharan Africa just under 18 months ago, Comedy Central has successfully lured South Africa’s top comics into hosting its regular monthly stand-up gig.  Among the many brilliant funnymen and women to grace the stage at Parker’s Comedy & Jive have been Chris Forrest, Kurt Schoonraad, Tumi Morake, Al Prodgers, Joey Rasdien, Barry Hilton, Loyiso Gola, Tats Nkonzo and Stuart Taylor.
To see Basketmouth at the top of his game, tune into Comedy Central Presents Basketmouth Live at Parkers on Comedy Central (DStv Channel 122) on Friday 14 June 2013 at 19:55 WAT/20:55 CAT.
For further information about Comedy Central Presents…Live at Parker's, please go to www.comedycentralafrica.com, www.facebook.com/comedycentralafrica or www.twitter.com/comedycentralAF.  To voice your views on Comedy Central Presents…Live at Parker’s, please add #CCLAP to your tweets.