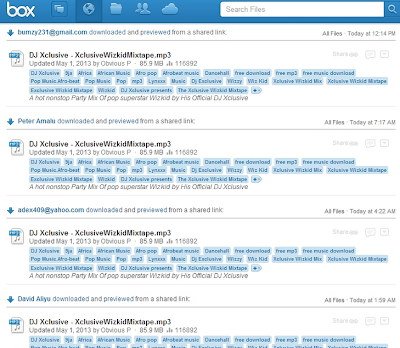 DJ Xclusive Becomes the Gagnam Style of Mixtape Downloads: Sets a new record with Over 116,000 Downloads of The #XclusiveWizKidMix within 72 Hours

Superstar Dj Xclusive and his team would like to THANK YOU specially, for your priceless support in numerous ways especially by using your various valued media platforms to support the historic and remarkable success of The Xclusive Wizkid Mixtape featuring some of the biggest hits of the Pop sensation Wizkid; by Superstar Dj Xclusive.
The Xclusive Wizkid Mixtape as you know, was released online at about 7PM on Wednesday, May 1st to the Music-loving public. The instant response to Xclusive's Wizzy Party Non-stop was so much, that it set Three different trending topics on twitter, and two out of the three topics became top trending topics in Nigeria for 2 days!Considering the fact that that the songs on the mixtape were already known, the size of the file which is 85.9 Megabytes, no one would have predicted that the #XclusiveWizkidMix would set an amazing new record of Over One Hundred and Sixteen Thousand (116,000+) downloads within the space of 72 Hours of its release!
As at press time, the number of confirmed downloads from the official download link, stands at 116,540! This statistics is news worthy and this new record wouldn't have been possible or achieved without YOU!We're also glad to also inform you that you'll be hearing from Dj Xclusive very soon as he is currently putting finishing touches to his series of projects.
#XclusiveWizkidMix Download here