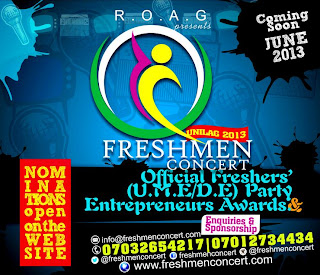 R.O.A.G Presents The FRESHMEN CONCERT - UNILAG 2013. This event is the first of such awards in the Prestigious University of Lagos, poised with celebrating newly admitted students of the university and also the creative and pro-active students by rewarding their outstanding entrepreneurial skills on campus.

Through this event, energetic and interactive entrepreneurs ranging from artistes to actors/actresses, models, vixens, bloggers, producers, photographers, comedians, on air personalities, etc would be gathered to celebrate one another’s successes.

This, organizers believe will challenge and spurn other students to excel in their chosen field by adding value to our world. It is a platform to converse, relax and be entertained by various talented acts, as the event promises to leave lasting impressions in the minds of students of the University of Lagos.

The Entrepreneurs Awards is an award aimed at recognizing the hardworking youths of the University. The award is set to hold in June 2013 and promises to be a memorable event. Categories in the awards include:

“Producer of the Year

Model of the Year

Actor/Actress of the Year

Artiste of the Year

OAP of the Year

Photographer of the Year

Comedian of the Year

Clothing Company of the Year

Event Strategist of the Year

Magazine of the Year

Fashion Designer of the Year

Vixen of the Year

Rave Club of the Year”

STEP3: Submit your entry by clicking SEND. A confirmation would be sent to you via email.

NOTE: You can vote as many times as possible.