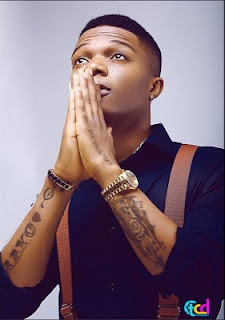 Ayotunde 'Wizkid' Balogun is barely 5ft tall and yet with his tiny little frame he influences more young people in Nigeria than the country's ruling class.

Born into a polygamous family, Wizkid, 23, knew early on what he wanted to be in life- a star. Through hard work and determination he has achieved this- hefty performance fee, a crib in Lekki and a BMW X6 and Porsche to go. Lets leave the mind numbing beats and hot catch phrases he uses in his songs; Wizkid resonates with the youths in Nigeria because he is succeeding in life according to his own terms despite the harsh nature of the Nigerian society that neglects the young.

"Life of man, solitary, poor, nasty, brutish and short"- Thomas Hobbes wrote that in 1651 in his book The Leviathan. That statement best describes life in Nigeria for people in the middle and lower classes. Ignore the Animal Farm figures paraded by government officials to show Nigeria's economy is growing. Life is still a mess. The facts speak for themselves- power supply erratic is as ever, health care system is non existent, educational system is comatose and security while not as high as South Africa's is quite worrying especially with the rate of kidnappings on the rise.

This is the reality young people live in daily. We didn't experience Nigeria of the 60's and 70's where 50 Cents was equal to a Naira. We don't know what is like for companies to scramble to employ you before you are barely out of the University. Teenagers and young adults like me have only known Nigeria- the castrated stumbling giant of Africa. Young people feel disconnected to the country of their birth and are largely not interested in what happens in the corridors of power. And the lack of interest became worse after the last general elections and the Occupy Nigeria rally that failed to turn things around.

In a lot of suburbs and slums in Nigeria, young people are taking life into their own hands. They've realized that no government is going to provide any social welfare for them that will guarantee them a better tomorrow. The rule on the streets is find a hustle that will make you blow and let the nation be damned.
There is no one that is using that principle better than Wizkid presently. At the age of 23, Wizkid is his own boss after successfully renegotiating his deal with EME and floating his own record label- Star Boy. Independent and making money, Wizkid's desire to be the artisan of his fate is the zeitgeist of a generation bent on making it despite all the obstacles. We might not have a Mark Zuckerberg but we have a Wizzy.
And it's not only him- musical acts like Ice Prince and Olamide decided to skip University education that have been neglected by our leaders, many who have private universities that are too expensive for the common folk, in search of a better life. Their get-rich-or-die-trying approach resonates with the young people in Nigeria more than any speech or scheme by Nigeria's ruling elite. Why? It's honesty over hypocrisy. Truth over lies.

2 years from now, Nigeria's crooked politicians will rise up again and use 'youth leaders and advocates' to get votes from the youth demographic. With the way the last election went, I don't think young men and women who gave hope a last shot will want to stand in the sun again and be part of a sham. We will be too busy trying to make a living for ourselves, trying to survive against all odds they have thrown at us.
In 2015 the blood stained ballot boxes will be cleaned again and new slogans will be created to seduce us for our votes. They can have their election or selection. We don't care because we will be about our hustle just like Wizkid.