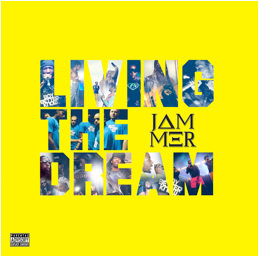 Featuring the cream of the UK Grime scene including Skepta and JME; Jammer presents his brand new album ‘Living The Dream’ which takes influence from a broad spectrum of genres including UK Grime, Reggae, West Coast Trap, R&B, Soul, Bashment, Garage, House & Hip-Hop all underpinned by a 140bpm backbone.
‘Declined’ is a fresh slice of in-your-face Grime, as would only be right as the lead track from one of the Grime pioneers albums. ‘Declined’ premiered on 29/05/13 with DJ Charlie Sloth who reloaded the track a massive 3 times as part of his drive-time show on BBC 1Xtra. The video premiere followed the same day via the giant youth platform SBTV, you can check it out here:
Across the 13-track album there is production assistance from such scene stalwarts as Skepta, Rude Kid, Thomas Mellor, Two Seven and Jammer himself. Watch out for previously released single “Big Man” and the remix of previously released “On The Ball” which provide a powerful jump-start to this epic album.
Elsewhere the unexpected surprises continue and an R&B influence shine through in the shape of “Fast Life” featuring Skepta & album titled ‘Living The Dream’. The beginning and the end firmly marked by the carefully crafted Intro & Outros bringing the album to a well-rounded and satisfying finish.
Tracklist:
01. Intro
02. All Eyes On Us
03. Fat Boys
04. Declined
05. Big Man (feat Viper, JME, Scratchy, B Live, Lay Z, Flow Dan & Sox)
06. Mind, Body & Soul
07. Fast Life
08. Living the Dream
09. Live Like Family
10. Skit 11. On The Ball Part 2
12. Purpose
13. Outro
And then there’s the launch party!
Famed for his love of partying; Jammer will officially launch ‘Living The Dream’ to coincide with the well-publicised and landmark occasion of Jammer’s Birthday Bash held at the Inc Club at London’s o2 Arena on 29th June 2013. The event is set to see a whole host of supporters, fans and fellow artists come together to support the release and be treated to an evening of live entertainment with special guests taking to the mic!
(For more information regarding Jammer’s Birthday Bash please contact: https://www.theticketsellers.co.uk/tickets/jammers-birthday/10026670