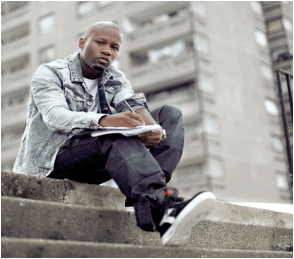 Mynature (pronounced ‘miniature’) is a rapper from South-East London, whose journey to the spotlight has been tougher than most.

His musical prospects were hampered by a life of crime, which eventually caught up with him when at age 21 when Mynature was sentenced to 6 years in prison. Determined to turn his life around Mynature turned to rap.
Over this EFX produced track Mynature proclaims the he is rap personified, a massive statement that he can back up with his trademark wordplay, lyricism and flow. On Mr Is Rap he poses the question “why so many wack rappers are getting airplay when all they talk about is money and clothes or they rap abut a lifestyle that isn’t true to themselves”. Seeing the demise of Hip Hop and its culture, he proclaims himself to be its savior in effect saving hip-hop from itself as his superheroesque alter ego Mr. Is Rap.

Upon his release and following a chance meeting with EFX and Ben “Billionaire Ben” Wynter from Unstoppable Music Group, Mynature burst onto the scene when he started his Mini-Mondays series. This saw him release a video every week for 9 weeks to critical acclaim. The Myni-Mondays series secured Mynature roughly 200,000 Youtube views in 9 weeks, whilst the likes of SEMTEX (1Xtra), SHORTEE BLITZ (Kiss), 279 (Choice FM), ANGUS BATEY (Guardian newspaper) and more tipped him as one to watch.
MYNATURE “MR IS RAP” will be released by UNSTOPPABLE MUSIC GROUP on the 23rd June 2013

Listen to 'Mr Is Rap'