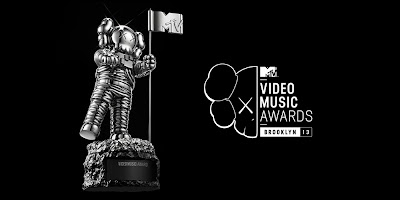 MTV has teamed up with the world-renowned, Brooklyn-based artist KAWS to reimagine the MTV “Moonman” trophy for the 2013 MTV “Video Music Awards”.  An artist whose work has been presented at prestigious museums and galleries from Los Angeles to Paris, Tokyo and Hong Kong, KAWS’ art will be present throughout the award show, influencing the design for the set as well as the logo.  Additionally, artists who win a 2013 “Video Music Award” will take home a special-editionKAWS Moonman, which was created exclusively for this year’s show.

The first major awards show to ever take place in Brooklyn, the MTV “Video Music Awards” will be held at the Barclays Center on25 August 2013 and will broadcast live across Africa on MTV (DStv Channel 130) on Monday 26 August, and subsequently premiering on MTV Base (DStv Channel 322) at 16:00 CAT on Tuesday 27 August.

“Creative experimentation and reinvention are in MTV’s DNA.  We have a history of partnering with groundbreaking artists - from Jean-Michel Basquiat to Andy Warhol - to bring inventive, thought-provoking works directly to our audience,” said Stephen Friedman, President of MTV.  “KAWS is the perfect partner to continue this legacy, and his redesigned Moonman is the perfect centerpiece for music’s most irreverent award show.”

“I grew up watching MTV and the “Video Music Awards”, so I was excited to interject my work into this world,” said KAWS.  “It’s a true honour to be able to reimagine such an iconic symbol in music and pop culture, especially since the show is taking place in Brooklyn.  I’m looking forward to seeing KAWS Moonmen take over the 2013 VMAs.’”

KAWS, who has also collaborated with musicians including Kanye West and Pharrell, kept the design true to the Moonman’s iconic image, while re-contextualizing it with his signature inflated skull and crossbones.  The special-edition KAWS Moonman draws influence from KAWS’ COMPANION, and echoes the artist’s earlier works which have created a dialogue with iconic characters such as Mickey Mouse and The Simpsons.  KAWS, who has been compared to Keith Haring and other pioneering contemporary visual artists, straddles the line between street and established art.  His transformative works move seamlessly from art to commerce, as he injects sophisticated humour and playful intricacy that reflects on and sparks a conversation about the nature of contemporary culture.

MTV’s collaboration with KAWS builds on the network’s rich legacy of introducing its audience to vanguard art, including early work from Keith Haring, Jean-Michel Basquiat, Stephen Sprouse, Spike Jonze, Kenny Scharf and Doug Aitken, as well as Andy Warhol’s 15 Minutes.  Additionally, glass sculptor Dale Chihuly’s work made an MTV “Video Music Awards” appearance in 2004, when one of his pieces was built into the show’s set.  And, in 2012, MTV partnered with MoMA PS1 and Creative Time to revive Art Breaks, airing a series of ten original video art pieces by some of the most exciting emerging artists from around the world.