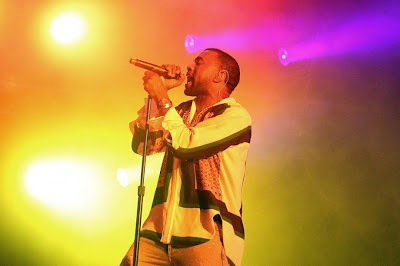 MTV (DStv Channel #130) announced today that megastar Kanye West is set to perform on the "2013 MTV Video Music Awards” stage LIVE from Brooklyn’s Barclays Center on 26 August at 03:00 CAT. Following his performance of "BLKKK SKKKN HEAD," West will triumphantly enter the history books by making a tie with music icon, Madonna as the artist with the most VMA performances. Both artists have notched performances at seven separate VMAs. The announcement was made today from the iconic Brooklyn Bridge and shared across MTV's social channels on Twitter, Facebook, Instagram and Vine.


As a three-time VMA award winner, Kanye West has delivered some of the most visually stunning and memorable performances to date including the first look at Watch The Throne - which would become the highest grossing tour in hip-hop history -  “Otis” with JAY Z in 2011; the innovative, theatrical staging and visuals of “Runaway” in 2010; his performance debut with auto-tune on “Love Lockdown” in 2008, a sound that would influence and dominate the charts for years to come; the hugely-influential, Daft Punk-sampling “Stronger” and “Good Life” with T-Pain in 2007; the mega-hit “Gold Digger” featuring Jamie Foxx in 2005, and his VMA debut performance with a medley of “Jesus Walks/All Falls Down/Through The Wire” featuring Chaka Khan in 2004. With this forthcoming performance, he will tie Madonna as the artist with the most VMA performances with performances at seven separate VMA ceremonies.

Bruno Mars continues his hugely successful year by garnering four nominations including “Video of the Year”, “Best Pop Video”, and “Best Male Video” for “Locked Out of Heaven”, and “Best Choreography” for the smooth summer groove, “Treasure”.

Taking place at Brooklyn’s Barclays Center at 26 August 03:00 CAT, the MTV “Video Music Awards“ will broadcast live across Africa on MTV (DStv Channel 130) on Monday 26 August, with the primetime premiere later the same night at 20.30 CAT.  The show subsequently premieres on MTV Base (DStv Channel 322) at 16:00 CAT on Tuesday 27 August.