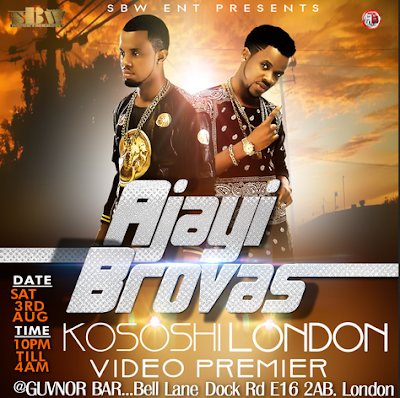 SBW ENTERTAINMENT presents the Ajayi Brothers in its brand new musical video KOSOSHI.
The Ajayi Brorthers having wow fans and music lovers on its enigmatic return to the music industry sometimes in June are here with the visual to its spanking single Kososhi produced by Cheepho.
For those who have followed the Nigerian music industry closely for years, the name Ajayi Brovas will definitely ring a bell. Their career goes as far back 2006 when they pitched tent with Coded Tunes clique before they were signed on to Alapomeji Records in 2008 by 9ice as a recording and backup artiste.
Both graduate of University of Ilorin, their major solo release were ‘Little Mama’ feat. 9ice in 2008 and video directed by Clarence Peters, “Gbodowa” in 2010 and lastly in 2011 “Appetizer” which was collaborated with 9ice and video directed by Sesan in London.
The video for Kososhi is directed by Patrick Elis and you could watch out for its official London Premier party this Saturday, 3rd Aug, 2013 at Guvnor Bar, Bell lane, Dock Rd. London. EnJoy!