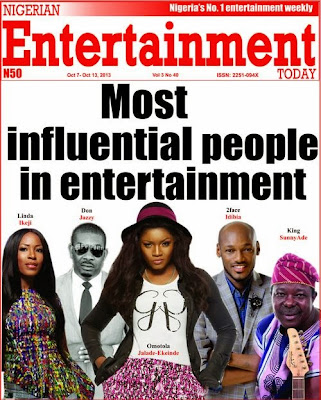 Nigeria’s leading authority in entertainment journalism, Nigerian Entertainment Today, has officially released its authoritative list of most influential individuals in 2013.

The list comprises artistes, actors, thinkers, entrepreneurs, and captains of industry. Their ideas spark dialogue and dissent and sometimes even controversies; their works have shaped lives, habits and societies; their actions have also led to some of the decisions that have stirred the industry in its current direction.

These remarkable men and women, with lasting and laudable influence, do not necessarily make the most popular people in the industry, but their actions carry a lot of weight with the hope of the future resting on their shoulders.

Publisher of Nigerian Entertainment Today, Ayeni Adekunle Samuel commended the selected individuals saying “It’s thrilling to note that so many Nigerians have been inspired by the efforts and advocacy of these people.”

2face Idibia: From his artistry to passion for change, the Pop king of Africa has continued to use his music as a muse to influence all. Through his foundation, ‘2face Idibia Reach-Out Foundation’, Idibia, an icon by every definition, has dedicated a great amount of time, effort and resources towards reaching out to fellow humans in need.

Alex Okosi: As Senior Vice President and Managing Director of Viacom International, Africa, Okosi continues to showcase Africa to the world and vice versa with the MTV, BET, Nickelodeon and Comedy Central platforms. Okosi is one of the top dogs determining the present and future of entertainment on TV.

Ali Baba: Still at the top of the food chain when it concerns comedy in Nigeria, Ali Baba, a pioneer stand-up comedian is not only responsible for making the trade profitable, he continues to use his influence to hold up the platform for others to shine.

Amaka Igwe: A strong pillar in Nollywood, Igwe’s undying love for motion picture has helped her carve a niche for herself whether with her famous soap operas or her annual BOBTV TV expo. Her Lagos-based radio station, Top Radio has also become a force to reckon with.

Amin Moussalli: The Lebanese boss actually started doing business in Nigeria as far back as 1975 with his AIM architectural company but his love for broadcasting drove him to create radio stations Cool FM, Wazobia FM and later on Nigeria Info with his daughter Evita in the helm of affairs. These stations have become one of the biggest outfits in Nigeria reaching millions in four different cities.

Audu Maikori: It’s been rocky times at Chocolate City in the last seven months but Maikori, a lawyer and entrepreneur has shown nothing but exemplary skills in stirring the entertainment label through murky waters. With A-list acts like M.I. and Ice Prince, Chocolate City still remains one of the biggest music labels in Africa. Don’t be surprised if they announce an IPO soon.

Ayo Animashaun: Through his Smooth Promotions company, Animashaun, 43, has launched some of the most relevant entertainment platforms including ‘The Headies’ and the 24-hour channel ‘Hip TV’ which launches on DSTV this month.

Bolanle Austen Peters:  Peters is the soul of Terra Kulture - a highly recognised cultural hub set up to promote the richness and diversity of Nigerian languages, arts and culture. Respected for enabling the sustenance of live theatre in Lagos, she’s now executing the big-budget SARO musical that’s already receiving critical acclaim. In eight years of existence, Terra Kulture has organised no less than 60 plays, over 100 exhibitions, and approximately 10,000 children have been through their language, culture clubs and excursions.

Biola Alabi : Managing Director at M-NET Africa over the last four years, Alabi has engineered the process of bringing top African content to our doorsteps. This year, she birthed the successful and well rated African Magic Viewer’s Choice Awards (AMVCAs).

Chika Nwobi: Nwobi is a serial entrepreneur.  From MTech- a leading mobile content company in Africa to Jobberman.com-West Africa’s most popular jobs portal to Cheki.com.ng-Nigeria’s leading cars/autos website to Kamdora.com a fast growing e-commerce fashion retail business in Nigeria, Nwobi has successfully built mobile and internet-related companies; using unusual techniques to link IT with entertainment while delivering value for consumers and helping Telcos excite a generation in love with music.

Chris Ubosi: He is the CEO of Megalectrics Limited, owners of Premium choice BEAT 99.9FM, retro-styled Classic FM 93.7 and pidgin-speaking Naija FM 102.7, which have all continued to dominate their respective fields. Ubosi, who seems to be warming up to the cameras nowadays has also launched a sister station in Ibadan and will be setting up a TV channel real soon.

Clarence Peters: Three of out every five videos seen on Nigerian TV is directed by Clarence Peters. As the CEO of a record label called Capital Hill Records and a multimedia content creation company called CAPital Dream Pictures, he has shot a good number of videos, documentaries, TV commercials, short films and TV features. Clarence is no doubt the most sought after video director in the music industry so much that his name has become synonymous with top quality musical videos.

D’banj: In the last 12 months, the self-styled entertainer has brushed off any kind of doubt about whether he can progress career-wise after his split with former Mo’Hits partner Don Jazzy. Whether it’s performing at the finale of African Cup of Nations, collaborating with US artistes, headlining Hennessy Artistry or becoming the face of the Bank of Industry, D’banj has shown constant sheer determination and dominance. And there’s an indefinitely long list of young cats praying day and night to have a quarter of his blessings.