NIGERIA'S BIGGEST MUSICAL COMES TO YOU THIS WEEKEND! 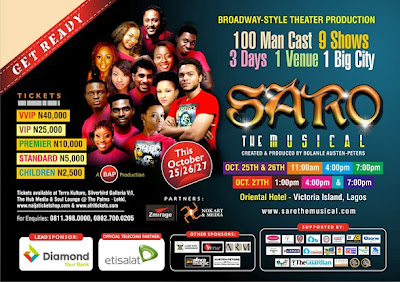 This weekend (25th – 27th October 2013), the epically titled ‘Saro: The Musical’ – easily the biggest Nigerian-owned stage production in decades – will be making its debut at the Grand Ballroom of the Oriental Hotel, bringing together the bright and colorful elements of love, laughter, and adventure, set against the backdrop of a grey, brutal, and unforgiving Lagos.

Created and produced by respected businesswoman and founder of renowned cultural center Terra Kulture, Bolanle Austen-Peters, Saro is the story of four young people in an age-old search for greener pastures, who migrate to Lagos with little else but an abundance of hopes and dreams, where they are duly reoriented by the people and experiences they encounter on their journey of self-realization. Weaving together the trials, misfortunes, loves, and destinies of the foursome into a 14-act masterpiece, Saro tells the unforgettable and inspiring story of the journey to success in a city filled with broken dreams, as we see Lagos personified by its numerous colorful and unforgettable characters, frenetic pace of living, and endless drama.

Boasting a monster 100-man cast performing on a one-of-its-kind custom-built stage, Saro traces and pays homage to Nigeria’s rich musical history by beautifully rendering some our greatest hits over the years, while also delivers its own ingeniously composed original music. Masterfully combining this with the impeccably choreographed dance routines and unforgettably charged performances delivered by a talented and attractive cast, Saro is a theatrical joy that gallops swiftly through its fourteen acts to tell the story of Lagos settlers; immigrants who come from all over the country and indeed the world, to create a new and hopefully successful life in this bustling and exciting melting-pot.

After two wildly successful previews to a selected audience and the press, over 3000 people from all over the world tuned in yesterday at 6PM [WAT] for a rare peek into the preparations for this epic production, as the rehearsal sessions for Saro was broadcasted live to the world, via Google+ Hangout after which they got to interact with the cast and crew. Recording a mind-bogging 10,000 impressions recorded during the 1-hour hangout, Saro gave the world a mouth-watering preview into the awe-inspiring experience that will be making its debut this weekend.

Saro: The Musical is a co-production of Terra Kulture and Zmirage Productions, and is set to premiere onstage at the Oriental Hotel in Victoria Island, Lagos, from the 25th – 27th of October 2013. The play features some of the finest talent in Nigerian theater such as Kemi Lala Akindoju, Paul Alumona, Linda Nwanneka, Eferoghene Awusa, William Benson, Okafor Francis Chibuzor, Awele Dekpe, Patrick Diabuah, Adesuwa Etomi and Anthony OffiongEdet.