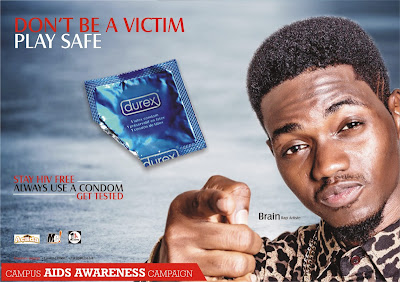 After dropping his much anticipated debut video "Watcha  Looking At?" shot by Africa's most-wanted music video director, MATTMAX , Magikal Entertainment hiphop act BRAIN is set to drop his third single “Raindrop” on Sunday 1st December, 2013 which happens to be the World AIDS Day.

The conscious song featuring velvety voice Oyinkansola and produced by the fast rising producer, Mr. Vyne is produced as an HIV/AIDS awareness song for young Nigerian, most especially the campus students.

The concept for the 1 Life 2 Live - Campus HIV/AIDS Campaign is a brainchild of ACADA Magazine, Nigeria’s leading campus and youth magazine and BRAIN will be featuring in various campaign materials that will be developed to sanitize the campus community about the deadly disease.

Also to lend her support for the Campus HIV/AIDS Awareness Project, top celebrity Toni Payne will also be contributing a Spoken Wordto the musical project. The spoken words that deals with the issues surrounding HIV/AIDS will also feature on the promotional CD and will also be available online.

BRAIN who couldn’t hide his happiness stated that, “it’s been a long time coming, and I’m grateful to God that I’m having the opportunity to show the world what I’ve got in me.” Speaking further on the new single, “Raincoat”, “this is one of my best songs so far because it is a song that deals with what many young Nigerians don’t take serious, especially the campus students. HIV/AIDS is real and I want to use my music to sanitize young Nigerians about scourge and deadliness of the disease. I was first skeptical when my label told me to do a song that will address the issue, but to God be the glory, I and Oyinkansola did a great job with the song and I will implore every young person to have the song as their caller tunes and download it on their mobile phones when it is released. It will greatly help to put them on check and for them to practice safe sex if they must do it”, he concluded.

The song will be available for sale on Spinlet from 1st of December, 2013 and also as callertunes. Part of the proceeds from its sales will be channeled into the production of publicity materials that will be distributed across campuses in Nigeria.