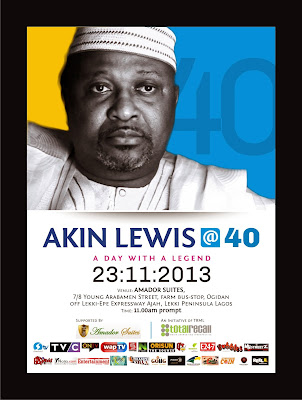 An apex name in media across Africa, Total Recall Media Limited has announced its plan to unveil activities to celebrate one of Nollywood veteran actors, Akin-Lewis. The idea is to celebrate the legendary actor Akintola Akin-Lewis 40 years on stage as an actor, director and as a brand icon. The event to celebrate Akintola Akin Lewis is tagged AKINTOLA AKIN-LEWIS 40 YEARS AS A PROFESSIONAL ON STAGE, RADIO, TV & FILM AND LAUNCHING OF ABAKE LEWIS FOUNDATION FOR THE ARTS (ALFA). The event is scheduled to take place on Saturday 23rd, November, 2013 at the AMADOR SUITES, 7/8 Arabamen Street, Farm Bus-Stop, Ogidan, Off Lekki-Epe Expressway, Ajah, Lagos by 11.00am Prompt. Keynote Address is to be delivered by Dr. Sola Fosudo (Lecturer and Actor).
Total Recall Media Limited spokesperson who doubles as the Projector Coordinator of the event, Mr. Alayande Stephen T. said “the idea is to celebrate one of the Nollywood legendary actor Akintola Akin-Lewis. He started acting professionally since 1973 and up till date, he is still very relevant in Industry, hence, this call for celebration. Today, he is a producer, director and an actor of uncommon hue.  Some of his early productions as a producer and director include the Original Awada Keri-keri as done by Ajimajasan and his travelling theatre, Why Worry and Koko Close in the early 1980s. Enough of celebrating people after their demise, Akin-Lewis has become a Living legend in the Industry, so why not give him a befitting and a whaooo event?”, he averred.
He has been opportune to interpret roles in English, Yoruba and you won’t believe it, Bulgarian and French languages!, on stage, films and TV series. He has participated in thousands of TV Soaps and films and hundreds of stage plays including Biko’s Inquest directed by Wole Soyinka, Dream on Monkey Mountains directed by Carrol Dawnes, The Night Before directed by Bode Sowande, Wedlock of the gods by Zulu Sofola, as well as Moliere directed by Sacho Stoyanov.


Some of his blockbuster movies include Red Hot, Silver Lining, Madam Dearest, Were Alaso, Apere,  and Alantakun . Some of his currently running TV soaps are TINSEL, Spider, The Benjamins, Two Sides of a Coin, where he’s as usual in his true element. His CLASSICS include soaps like The Adventures of S.K Adio the Barber popularly known as Why Worry, Koko Close, Mind Bending etc