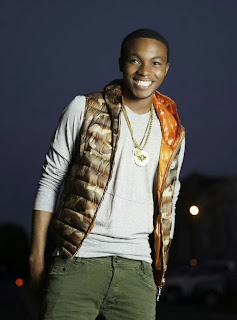 2013 is about to get a face lift! We happily introduce you to the #BoyWonder, "Ayo Jay".

There is more to Ayo Jay than just a fashion savvy, handsome face with a charming smile. With splendid reviews, critics are calling him the next big thing in music the scene. Born Ayoola Ogundeyi Jr. to a family of four, he developed a keen interest in music from a tender age when people could not stop complimenting him on his exceptional voice. Instead of delving into the music scene at that time, he opted to get an education in New York, and recently graduated from the university with a BBA in Economics. He only recorded his first song in 2011.
Though fairly young when old when Fela died in 1997, Ayo Jay grew up listening to the Afrobeat legend who heavily influenced him. Since it is said, by whoever says these things, that a musician is the sum of his influences, Ayo Jay is perfect hybrid of the greats before him. With the vocal range comparable to the late Michael Jackson, to his seductive lyrics like Usher or his melodious flows, all bundled into a potent blend that is rendered with the passion of Fela it safe to say ago jay is the last of the greats. He summarizes these attributes in his own words: "I tell a lot of stories in my songs. Both fictional and non-fictional. I can also make people dance. I could be political too; it all depends on how I'm feeling when I'm writing a song."

The One Nation Entertainment artiste has released unofficial singles, "Don't Say That," "Your Number," and "Jay Baba".

Under the guidance of Stargaze Management, the masterminds behind many successful artistes, Ayo Jay is destined for success.

It features the world famous Atlanta based dancers, "The Twerk Team".