POST DEMOCRACY DAY: THE EURO-CENTRIC CURRENCY OF THE "UNFORTUNATE" CITIZENRY 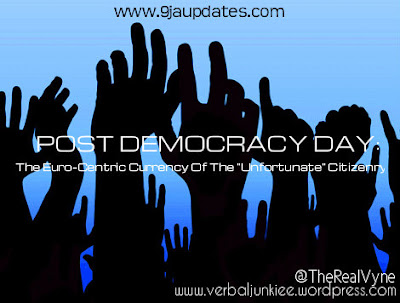 We sleep as Nigerians and wake up as idiots! No right thinking being wakes up on Democracy day with a faceless strategy to conquer the "biological-politics" that has long been in existence even way before Nigeria's birth. Democracy in Nigeria is an adopted-reality; our "Imaginary-Room-of-Rights". Democracy has never been a spectators sport!! It's a game of involvement, one that must preach the gospel of "Activism".

A paragraph from an impromptu speech given by [a one-time American President] George Bush sent chills down my spine. He said.. "America needs more than just tax payers, spectators and occasional voters... America needs FULL-TIME citizens." And I just kept shaking routinely. If America, (a country well known for having the most patriotic citizens) are still dissatisfied and are still seeking change, how much more Nigeria? Do we even know our needs? Can we even come to a consensus on what should be our common goal for Nigeria as a country?

If we dissect the already healing wounds.. Imbalance and Global Images/misrepresentation are the major problems we are facing. Imbalance stems from the North and south divide where over 80% of the world's resources is controlled by people who do not even constitute as much as 25% of the world's population. People who own the media and the experts behind the media, people who dictate the pace of what's "News" and what isn't. People who bask in the dysfunction of weaker countries, people who we define "Technology" by. People who make the "inventions" for us to follow. People who our presidents ( both past-and-present) have sought advice from, people who run to the rescue of third-world-nations with ease without it affecting their economical stance. It's an unending list that bruises my mind.

Where is Nigeria on the "effort-map"?

It should bring tragedy to the government that a report published in the U.S had Nigeria listed as one the UNFORTUNATE countries to be born into.(130 countries ranked globally) How depressing!!
Sincerely, it's not enough to identify the problems or give adjectives to interpret Nigeria's situation. If no deliberate effort is made to change it, then we have collectively failed as well. Hence Civic Engagement comes first in redeeming the situation. Its not enough to point all fingers to "bad leadership" we have also failed as followers. It is our electoral civic duty to vote always and not only when it's comfortable for us. Citizen that do not read newspapers daily have already flouted their civic duties. Other than that, how then can we even know the ongoings of "bad leadership"? If we are not informed about our own country? How then can we even call them out for messing up the offices we elected them into hoping that they will adequately represent the minds of the masses?

As we war against the bad, we must realize that our political leaders are profiting from the the disorder. They will never give up their political offices because our dysfunction is their opportunity. Hence there will be no incentive whatsoever to build infrastructures. It baffles me still, how can Democracy be successful without the welfare of the "led" being made priority? Whether as a Presidential, Military, or Parliamentary system of government, if the needs of the people are not met, then their willingness to be easily led would take brutality.

The irony of this intriguing episode is that we voted them in. Each government comes with its NEW promises, it's amazingly crafted speech, it's "revolutionizing agenda"... And in the end? They all get swallowed in the TIDE!! Complaining can be therapeutic. We have done that for an awfully long time. It bores me even.

We are free from colonialism yet still bound by the Euro-centric mentality where everything that isn't Nigerian-bred excites us terribly. Did our sense of "oneness" die in the hands of our colonial masters? Have we already defeated our country without even TRYING for the last time?.. Does the national anthem still mean something to us? When we recite the "pledge" do we even believe what we are saying? Are we even proud to wave our flags and see the loss of a "National-vision" as an individual loss as well?

Are we ready to mount from the latest cars and walk with everyone else who is ready to stand through the scorching sun to tell the government that we have had enough of bad governance? either verbally or by the power of the pen? Are we ready to evoke emotions through the lyrics of the songs we sing to awaken selflessness? Nigeria will not change itself. We are the hands, ears, eyes, and mouths of our country!! Are we ready to accept the rejection we may face for trying? Are we ready to die fighting for our country knowing fully that every social action has an unintended negative consequence?

We can't just feign ignorance and celebrate the innumerable national events, when by the day what passes as our FUTURE is being compromised.