LABEL ME A HOE - TO ALL FEMALES GROSSLY MISUNDERSTOOD 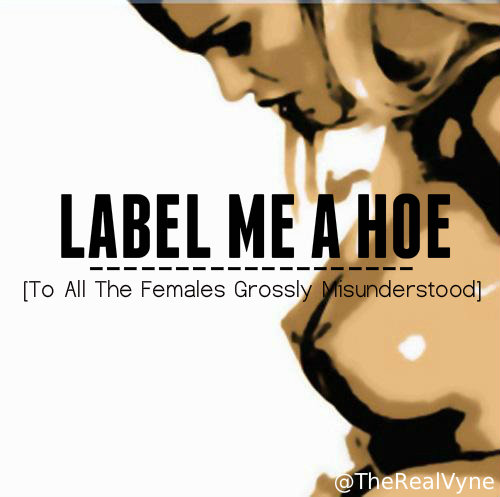 It’s easier to act all “bullet-meets-proof” when you’re worn from going-door-to-door writing a premature biography on the death-note leveled against you by people you barely know..
Until today, at the end of the tunnel of the this quote—>”People will judge anyway”. Was my ‘indifference’.

Now 2:06AM,…..I’m face-to-face with my iPhone screen nodding in affirmation.
Some people are like me. Bitter at night & bubbly during the day. [What pain that must kill us daily as we lay king-sized minds on oval shaped globe-pillows of societal scrutiny.]

I've have had strangers define me by standards lower than my idea of "A-Committable-Sin"....
People who I'd barely recognize in a room full of 'just' 'me' & 'them'....

Recants of me sleeping with men I'm hearing their names for the first time...
I wake up daily under societal & moral scrutiny...
Of Who's bad? & Who isn't?

Sinners picking pebbles.. I fall faced down. Pebbles now...who knows.. Bricks later. -Maybe.
I've been in relationships with men who 'allegedly' fucked me on the first date...[Strangers spewing stories from the synopsis of group-imagination]

I’ve stolen men from their partners & remained unapologetic…? – [I'm crucified in the Golgotha of undeserved pain]

I’ve been drunk-fucked…[Regardless that I do not drink? Lol!]
Funny how strangers tell the best tales…

From wrestling with the society for my identity, I’m losing my self. My confidence.
So I’m guessing this is the unlucky part of being free-spirited…

I’m guessing It’s the unwholesome-end of being too punctual for occasions that concern you..
…Unarguably the price you pay for being as human as you can be.

Shitty thing is that you lose friends not knowing why…
[Can you blame individuals salvaging their reputations from the heat of the society?] – I think not.
Myself ain’t never talked to me like this before…

The society is a parody of their own reflection.. The only leverage would have been people who “know” you….

Who knows who? Public opinion is the easiest biography/veto on man’s existence.
-So to clear the air, I am my own defense attorney.

Let them think what they may
Let them merge alphabets & carve sentences. The truth is simple. Anyone may have been anything in ‘calendars-past’… But you can only account for the time you’ve spent with them.

If only strangers realized that “not-easily-broken” may eventually fail in its durability. Then people would make it easier for the grossly misunderstood persons to live.