MY MOTHER'S DAUGHTER BY @tipsyfilli

My Mother’s Daughter
Mind Games of the Mind 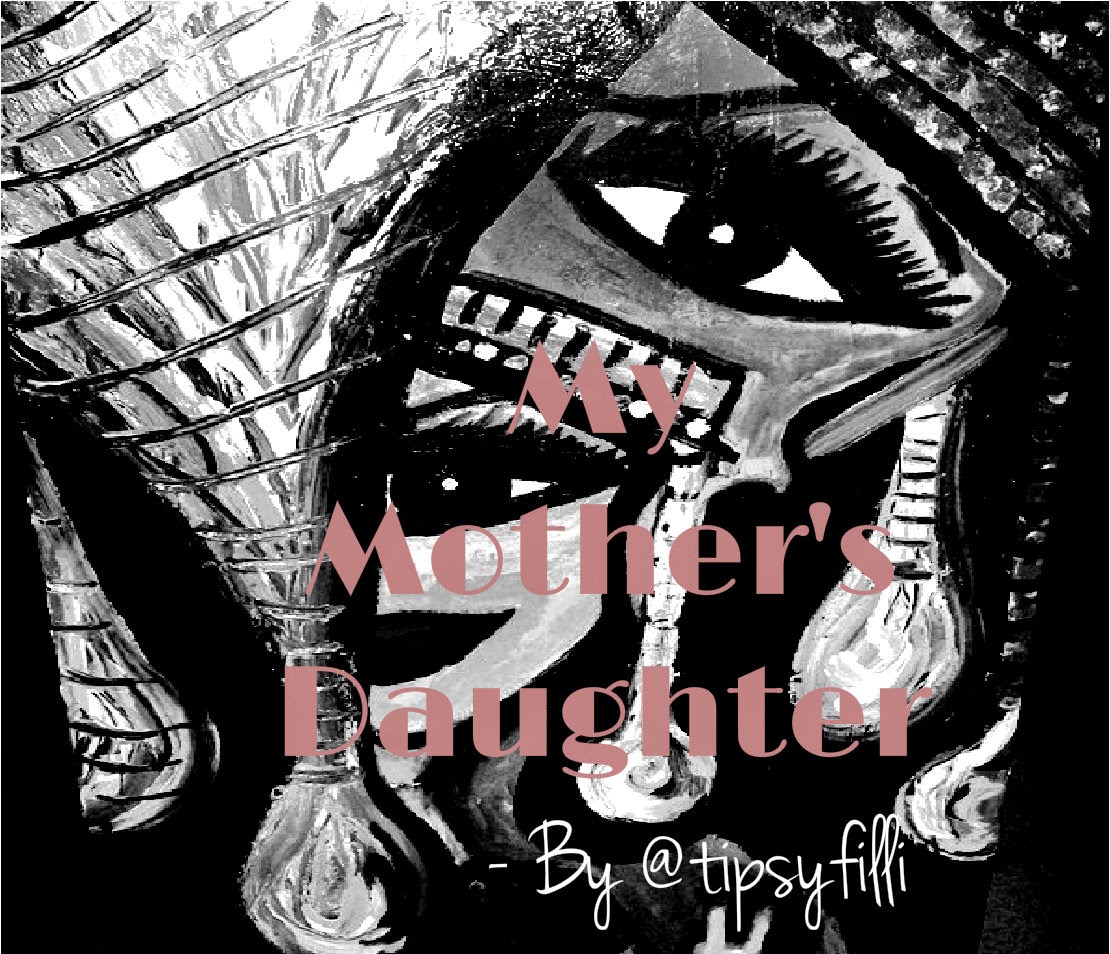 Ariyike! I kept my eyes closed and counted slowly to ten. I didn’t have to look at the illuminated face of my bed-side clock to know it was just 6 am. I waited in the dark, wondering if she would give up and let me be. On the third count of ten, I heard my door creak, gently fracturing the silence. She was so, so predictable. Light crept in from the hallway but I kept still, feigning sleep.
“Ariyike!” she called in a dramatically loud whisper. She snapped on the lights and the sudden illumination felt like a physical blow to my eyes. Immediately, I felt the beginnings of a splitting headache.
“Ariyike, wake up, it’s six already.” She said pulling the sheets off of me.
She really was predictable. I got down from my bed and pushed myself into a half kneeling position.
“Good morning mummy.” I said automatically.
“You should start getting ready.” She said ignoring my greeting and marching into my room.
“We don’t want to be late for the senator’s Birthday Brunch.” She said throwing open my wardrobe and peering inside.
“Mummy, I have lectures today…”
She paused and turned wounded eyes on me. You would think that after dealing with that look all my life, I would have become immune to it by now. Not even the fact that I’d been expecting this scene to pan out this way and that I’d been bracing myself for it helped. That hurt, no-one-cares-about-me look worked every time.
“But your lectures are in the afternoon.”
“Yes mummy, but I have a test to prepare for and…”
“But I told you about this two weeks ago!”
“Yes, but…”
She sighed dramatically, those large, beautiful eyes misting over on cue.
“Okay, no problem. I’ll have to go all by myself then.” She said.
“Mummy…”
“Don’t worry.” She said shutting the wardrobe carefully.
“I’ll just have to face your father and that whore on my own.”
You’re leaving me all alone, just like your father did.
She didn’t have to say the words. They hung in the air between us, like they always did every time I said no to her. She turned to look at me, looking vulnerable and fragile. A cloud of sleep-tousled hair framed her heart shaped face. She was one of those few lucky women whose eyes were naturally heavily lashed. High cheek bones and a small petit nose served to emphasize full lips that were almost always in an alluring pout. I could see why daddy had fallen for her. The same beautiful damsel-in-distress act was probably the reason why he picked himself up from her feet and left. Her tiny nose flared slightly, the only indication of her anger at me.
“Okay mummy, I’ll go but…”
“Awwwww my darling little girl!” she flew at me and smothered me in an embrace.
“Thank you!”
“I’ll have to leave early to get to school on time.” I said.
She went back to the wardrobe and threw it open.
“Let’s see, what do we have here? You need to look stylish and elegant.”
I sat on my bed and listened to her prattle on. It sure was going to be a long morning of dresses and accessories and hair and make-up. Yet again, she’d manipulated me into doing what she wanted. Or so she thought. She turned to me, holding a dress up for me to see with a triumphant smile on her face. I scoffed inwardly while returning her smile. I’d been the one to do the manipulating and things had gone just as I wanted them to. After all, I really was my mother’s daughter.

As expected, the brunch was just another excuse for over-dressed socialites to show off. Picture-perfect smiles that bellied the strong animosity they all felt for each other. I doubted if there was one person in that room who liked even one other guest. Including me. I won’t go as far as saying I disliked everyone at the brunch. I just really couldn’t be bothered with any of them. Even disdain shouldn’t be wasted on people who weren’t worth the trouble.
I hung on my mother’s arm like the priced crutch I was, back straight and my chin up and my ankles daintily crossed like a sorority sister. I had a smile on my face that mirrored mother’s beautiful one. I nibbled on my food and chatted politely with the other guests, saying all the right words, laughing behind my fingers at their inane jokes at the right moments. Just like mother taught me.
Daddy and his wife were seated across the room from us and of course, every time the women at our table started to titter, she would scowl and shoot murderous looks our way. Which was what mum wanted exactly. Why did daddy always end up with such predictable women? I saw her speak furiously in daddy’s ear before stomping out of the room. My eyes followed her to the doors even though I’d already dismissed her from my mind. I had bigger fish to fry and was awaiting the final piece of my carefully laid plans to fall in place. I peeked at my wrist watch and looked once again to the doors.
“Are you alright love?” mum asked.
“Yes mummy. I’ll have to leave soon if I’m to make that class.” I replied.
Her eyes went large and mournful on cue.
“Can’t you wait just a little longer?” she asked.
I made a show of taking a plaintive look at my wrist watch this time and bit the corner of my lip.
“But..”
“You know how it upsets me when your father shows up with somewhore else to rub in my face!” She whined.
“I’ll miss the test and…you know Dr. Fashola can be very nitty-picky when it comes to…”
“Fashola? You mean its Dare Fashola’s test you have this afternoon?”
“Yes mummy, how do you know my lecturer’s first name?!”
“Don’t worry your pretty head about that.” She said flicking one slender wrist airily. “I’ll have a chat to Dare and sort it out. Just promise to stay.”
I sighed dramatically feigning indecision.
“Okay mummy, but just for a little bit.” I said, putting a check on a test I’d missed a week earlier.
“Thank you darling!” she said air kissing me on both cheeks. No big smothering hugs in public. With one last look towards the doors over my shoulder, I excused myself to go the bathroom. I caught daddy’s eye as I walked by his table and he smiled at me, our first form of contact all afternoon. I stopped at his table knowing I would face the consequences later, but I didn’t care. Not even mommie’s biggest tantrum could stop me right then. I leaned over and wrapped my arms around him. Something else I would get a tongue-scalding for.
“How are you doing Pumpkin?” He asked half turning in his seat to return the hug.
“I’m fine daddy.” I said straightening up and right on cue, bumped into the guy behind me.
“Oops! Sorry!” I exclaimed, grabbing the guy’s arm to steady myself.
“Are you alright?” He asked.
Daddy jumped up and came around to fuss over me as well.
“Yeah…I’m fine.” I gave a small musical laugh. “I wasn’t looking where I was going, my bad!”
“I’m really sorry.” He said to me and then turned to my father. “Good afternoon Sir.” He said shaking daddy’s hand politely.
“How are you?” Daddy replied. “Ariyike, this is Jimi, his father is a new client of mine. Jimi, meet my daughter, Ariyike.”
“Hello.” I said shyly. “Pleased to meet you.”
“The pleasure’s all mine.” He said.
Oh no, it is all mine I thought, giving myself a mental pat on the back for perfect timing.
“Jimi is in his final year.” Daddy said, “Should be off to Law School in a few months.”
“Oh that’s great!” I said feigning surprise. What daddy probably didn’t know was that he was top three in his class, was president of the Law Students’ Society, had captained the team that won the last African Human Rights Moot Court Competition and liked his women tall, skinny and leggy. I always took pride in doing my homework thoroughly.
“Ariyike here is an Economist, second year.” Daddy offered, beaming at me proudly.
“Economics.” Jimi said. “Must be the reason we haven’t met.”
I smiled benignly, flashing my dimple and knowing it was lost on him. I was sooooo not his type, but a girl could try, couldn’t she? Plus I hadn’t gone through the elaborate scheme to get an introduction just to have it all fall apart around me.
“It was nice meeting you.” He said. “Maybe I’ll run into you sometime at Uni?”
“Same here.” I replied.
“Are you heading back there today?” he asked.
“Well, yes, I’ve got a late class.” I replied.
“Great, I’ve got a students’ rep meeting, I could give you a ride back.” He said.
“Thanks!
The day couldn’t have gone any better. Now I would get the chance to kill two birds with one stone, talk about catching a lucky break!

*
I lay in bed in the dark as always, wondering what drama to expect from mum today. To be fair, she’d been supportive in her own weird way about my heart break and the whole thing with Diana. She’d smothered me with attention, taken me shopping and off on a spa weekend. When I’d finally seen Diana, she’d looked right through me and dismissed me as she always did. No apology, no explanation, not even a sorry, pathetic lie. What did I expect really? After all, this was Diana and what Diana wants, Diana gets. It doesn’t matter who pays for it or who gets hurt in the process and I would have been a fool to think my being her best friend would have made a difference. And Jimi? I guess she was as much a challenge for him as he was for her.
My phone beeped and I picked it up from my night stand. I smiled when I read the message. When all the dust had settled, I’d found an ally in seemingly the most unlikely place. And he’d needed the support just as much as I had seemed to.

Hey! Sorry to text so early, hope I didn’t wake you. Just wanted to check on you and see that you’re okay. B.

I heard a floor board creak and I knew I had a few minutes before mum was in my room.

The door opened and mum snapped on the lights. I hardly noticed. All I could think was how I had missed it for the better part of two years.

Do you want to go get something before lectures? Or maybe just a coffee? B.

I smiled up at mum and threw off the covers before she could do it. I’m so glad I finally turned that corner and saw him, as in really saw him.

I pushed myself into my customary kneeling position.
“Good morning mummy.”

Great! I’ll pick you up at eight. See you then. B.